The end of October 2014 saw us moving back into the Land of the Giants after the tornado in February...it is fantastic to be home! We are looking forward to a quiet and peaceful 2015...fingers crossed!﻿

It was so exciting to attend the Supreme Dog Show on Saturday 28th June, especially having both Hunter and Magic qualifying for this Annual 'black tie event'. And did they do me proud or what!
Magic won the SUPREME PUPPY PLATE, and in the adult contest Hunter was a Supreme Finalist and came away with the the title SUPREME PERSONALITY. 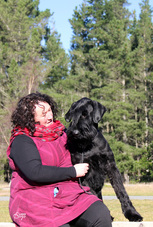 Maestro headed back into the breed ring at the end of May, gaining a Best of Group and Intermediate In Show under Claire Trevellyn at a CKA Open Show. 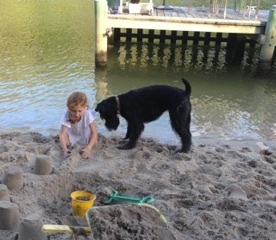 SUPER EXCITING NEWS!
Holly aka Zauberei Buzzee Bee has just qualified as a Delta Therapy Dog in Australia. So proud of her parents Jeannette and Keith - awesome achievement! I know Holly will bring much joy to many people.
An extra special day for the Zauberei Giants on Saturday 19th April, Magic goes BEST OF GROUP (Group 1) at North Canterbury Kennel Assoc. under Mrs Daines...
... while Mc goes RESERVE BEST OF GROUP (Group 2) at Auckland Kennel Club under Mrs Chalmers.

18th April - Mc and Jocelyn win the ANSUDA
Top Puppy of the Year 2013/2014
under the judging panel of Mr Lowe, Mrs Brooker and Mrs Day.

We are incredibly excited to announce that Mc and his awesome Jocelyn gained their New Zealand Champion title on Mc's first birthday - 5th April.
NZ CHAMPION Zauberei Got You Unda My Spell
Mc and Joceyln are really flying the Zauberei flag in the North Island...but best of all their bond is obvious to everyone!
March 2014 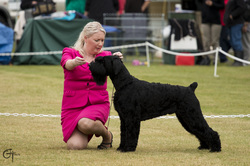 On the same day (29/03/14) as Mc takes BEST PUPPY IN GROUP in the North Island, Magic and Lisa go RESERVE BEST IN GROUP (GROUP 2) at the Geraldine County Kennel Association Show in the South Island...what an AWESOME day for the Zauberei babes...Magic at 18 months. 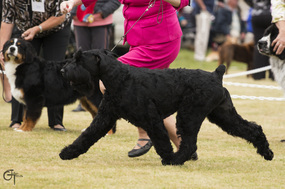 And the gorgeous Mc does it again...going Best Puppy of Group X 2 at both the North Shore Kennel Assocaition (22/02/14) and the Wairoa Kennel Association (29/03/14)... Giant congrats to his owner, groomer, handler and #1 fan Jocelyn!
DOUBLE WHAMMY for the Zauberei Giants at the Buller Kennel Association Show on 16th March with Magic going Best Junior of Group and Maestro Best Intermediate of Group!

A super exciting start to the show year with our 'baby' Mc aka
Zauberei Got you Unda My Spell going Best Puppy of Group at the
Northland Canine Association Show on the 26th January...and then BEST PUPPY IN SHOW at the Hibuscus Coast Kennel Association Show on the 1st February. Giant Congrats to his 'partner in crime' the awesome Jocelyn Field!
Mc has now qualified for the prestigious Puppy of the Year Show. 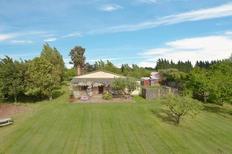 January 2014
We're moving house!! The Zauberei Giants are moving to their own 'Land of the Giants' near Amberley, North Canterbury at the end of January...something we are all excitedly looking forward to.

December 2013
Magic has started agility training...and LOVES it! Plans are for her first competition in April 2014.


2014 will be an exciting year for the Zauberei Giants, who will work on gaining their titles in a variety of dogsports. Hunter in sledding, Magic in agility, Mojo in obedience/Rally O and Maestro in obedience and tracking...and we also have 'Mc' (Zauberei Got You Unda My Spell) with Jocelyn in the North Island who had a very promising start to his show career.
zauberei, giant schnauzer, christchurch, new zealand, obedience, conformation, agility, rallyo