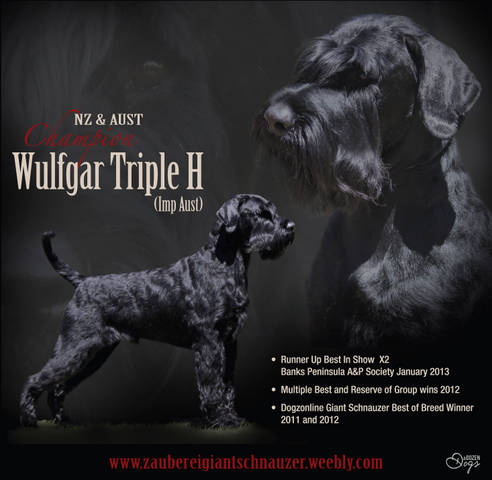 Born 20/11/2008
Click here to view Hunter's pedigree
Hunter was the national Number One Giant Schnauzer on Dogzonline NZ in 2011, 2012 and now in 2013 , with his wins in 2013 he finished the year as the THIRD top Utility Dog for the South Island. With two RESERVE BEST IN SHOWS in January 2013, it was a great year for Hunter.

Hunter is the first ever DUAL titled Giant Schnauzer in New Zealand and Australian history.

Hunter arrived in NZ in April 2011, on sabbatical from the Wulfgar Kennels in Australia where he has a very successful show career, including Best in Group/Multi Runner Up In Group, Multi Class in Group/Show and multiple Sweepstakes wins (can be viewed on Dogzonline Oz)

Many thanks go to Hunter's breeder Soile Gendle (Wulfgar Kennels), and Brett and Vanessa Lougheed for sharing this wonderful man.

Hunter has an amazing temperament, and is an excellent example of the breed with a genuine show ring presence. He is such a pleasure to own.

2014 saw Hunter less in the show ring as he worked towards him gaining the NZ Sledding Dog title...a first for the Giant Schnauzer breed in New Zealand. Hunter LOVES sledding and was out there racing with his partner Scoobi the Beardie and his awesome musher Karen.

At the prestigious 'black tie' event, The SUPREMES Dog Show 2014, Hunter not only made the top 8 finalists but was also named SUPREME PERSONALITY! Beautifully handled by his co-owner Mrs Kimberley Frazer, Hunter had a fun filled night.